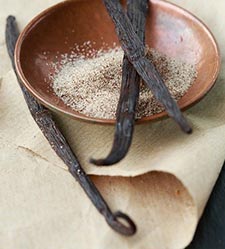 Next to saffron and cardamom, vanilla is the worlds next most expensive spice. Growers are known to “brand” their beans with pin pricks before they can be harvested, to identify the owner and prevent theft. Vanilla is native to Mexico, where it is still grown commercially. Vanilla was used by the Aztecs for flavouring their royal drink xocolatl – a mixture of cocoa beans, vanilla and honey. Cortez brought vanilla back to Europe in the sixteenth century, after having observed Montezuma drinking the cocoa concoction.

It has many non-culinary uses, including aromatizing perfumes, cigars and liqueurs. Europeans prefer to use the bean, while North Americans usually use the extract. Substances called “vanilla flavour” don’t contain vanilla at all, being synthesized from eugenol (clove oil), waste paper pulp, coal tar or ‘coumarin’, found in the tonka bean, whose use is forbidden in several countries.

Ice cream producers are unlikely to point out that their most popular flavour derives its name from the Latin word vagina. For ancient Romans, vagina meant sheath or scabbard. The Spanish adopted the word as vaina, which developed a diminutive form, vainilla, meaning “little sheath”. The Spanish made this diminutive the name of the plant because its pods resemble sheaths.

The flavouring comes from the seed pod, or the ‘bean’ of the vanilla plant. The prepared beans are very dark brown, slender, pleated and about 20 cm (8 in) long. The bean is tough and pliable, quality vanilla having a frosting of crystal called givre. The crystals contain the active ingredient ‘vanillin’ that produces the characteristic fragrance and is produced during the process of induced fermentation. These pods are called ‘fine vanilla’. ‘Woody vanilla’ is shorter, lighter coloured, uncrystallized, stronger and slightly bitter. All beans contain thousands of tiny black seeds. Vanilla extract is also available and, if of good quality, is identical in flavour to the pods.
Bouquet: highly fragrant and aromatic
Flavour: rich, full, aromatic and powerful. Madagascar and Mexico making the best quality. Indonesian and Tahitian vanilla is weaker and considered inferior.
Hotness Scale:1

Vanilla extract is made by percolating alcohol and water through chopped, cured beans, somewhat like making coffee. Vanilla extract is very powerful, a few drops sufficing for most uses. Vanilla bean is a bit more time consuming to use than the extract, but imparts the stongest vanilla flavour without the alcohol of extract. To flavour a liquid base for creme sauces, puddings, ice creams, etc., allow one bean per pint to steep in the liquid by boiling and allowing to cool for an hour before removing the bean. This can be repeated a few times if the bean is washed after use, dried and kept airtight. Ground vanilla can also be used, but use half as much and leave in the liquid. Many recipes call for slitting the bean lengthwise and scraping out the tiny black seeds. Airtight storage is necessary, otherwise the aroma will dissipate. A good way to store whole vanilla is to bury it in sugar. Use a jar with a tight-fitting lid that will hold about a pound of sugar, burying the bean so that no light can reach it. After 2 -3 weeks the sugar tastes of vanilla and can be used in coffee or in other recipes and the bean can be removed for other uses and returned to the sugar after cleaning. Keep topping up the sugar.

Vanilla is neutral and works in almost any sweet recipe, most of the other possible flavourings have a signature flavor of their own, and you’ll want to be sure the one you choose is compatible with what you’re cooking. Fiori di Sicilia, literally, the essence of Sicilian flowers, is the best substitute as it has the same neutral character that works well in most sweet dishes. Another substitute is vanilla essence, but remember that it won’t have alcohol in it.

Another option is using vanilla beans. You can also add vanilla liqueurs instead of that can easily be adapted into recipes. You can also opt for vanilla powder, but you must use half the quantity of extract. Maple syrup is known to be one of the best substitutes. You can use it in same quantity as vanilla is required to be used in the recipe. Almond extract is another option. This is because almond extract has a strong flavor, so don’t use it in the same amount as the vanilla. It would be best to use half the amount of vanilla extract.

From the time of the Aztecs, vanilla was considered an aphrodisiac. This reputation was much enhanced in 1762 when a German study found that a medication based on vanilla extract cured impotence — all 342 smiling subjects claimed they were cured. It was also once believed that vanilla was a febrifuge, used to reduce fevers, though it is rarely used for any medicinal purposes other than as a pharmaceutical flavouring.

Vanilla is a tropical climbing orchid, with a long green fleshy stem that sprouts roots that cling to trees parasitically. Its yellow or orange orchidaceous flowers grow in bunches, which bloom one flower each day, opening one by one during the two month season. Vanilla is a tropical crop and cannot grow naturally in temperate climates. When cultivated the vines are trained using posts and support trees. In nature they are only pollinated by Mexican bees and hummingbirds that are capable of penetrating a tough membrane that separates the plant’s pistol and stamen.

European entrepreneurs had transplanted vanilla to grow in other tropical locations but could not get them to produce the pods. It wasn’t until 1836 that a botanist from Belgium, Charles Morren, recognized that the flowers were not being pollinated and would require some human assistance. In 1841, Edmond Albius, a former slave, on the French Island of Réunion, perfected a method to artificially fertilize the short-lived vanilla flower using a thin bamboo skewer to lift the membrane and use his thumb to smear the pollen. This gave great impetus to vanilla bean husbandry, and the method is still used today.

The pods take about nine months to mature and are harvested when the tips begin to turn from yellow. Until recently, the curing process was long and complicated. The beans are first wrapped and subjected to high temperature and humidity to ‘kill’ the vegetative life. The next process involves alternate drying in the sun by day and sweating by night for several days. At this point the beans are dark, oily and pliable and are then slowly dried in the shade for up to two months. They are then sorted and graded and placed in chests for a further conditioning period of one or two months.

Vanilla is used in:

Image by gate74 from Pixabay