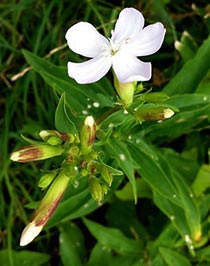 As you can guess from its name, soapwort can be used as a soap. In most cases it has been used as a substitute for laundry detergent. In ancient Greece, it was written about as a plant that helps to wash fabric. It was also used as a treatment for jaundice during the 17th century.

In modern times, it has been used as an expectorant and rheumatic. It can also be used to treat some skin conditions. The pale, woody root and stem of this plant, usually with bark attached, yield a sudsy, soapy extract that has often been often used in detergents and shampoos; but it has also found a few culinary uses, especially in the Middle East.

In America, soapwort is generally found in health food stores, often in powdered form: pieces of root and bark are preferable when you can find them.

Soapwort is native to Europe, North America, and Asia. Soapwort usually has a single straight stem grows up to a height of two feet or higher. Normally, the plant grows in bunched and has oval shaped leaves that grow opposite to each other on the stem. The leaves are pointed at the end, but the borders are even and smooth. Between the period July and September, the plant bears flowers that have five petals.

The colors of the soapwort flowers vary from whitish pink to rose and are approximately one inch in width. The soapwort flowers grow in bunches at the pinnacle of the stems. The aerial parts of the plant are picked during the summer while the root is harvested in the fall.

This obscure seasoning serves as an emulsifier for commercial tahini halvah, a favorite Middle Eastern sweet composed of crushed sesame seeds, sugar, and flavorings. It also forms the basis of a frostinglike, creamy dip called naatif, for the nut-filled pastries karabij, which are popular in Lebanon and Syria. (In a pinch, marshmallow spread can he substituted for naatif; just flavor it to taste with a few drops of lemon juice and orange-flower water.)

To make either halvah or naatif, first begin with an extract of soapwort. Wash about one ounce of pieces of root or bark and bring them to a boil in one cup of water; then set the spice and liquid aside to steep for a day or longer. Finally, boil it again and reduce the liquid to one quarter cup after the soapwort pieces have been strained out. If you have powdered soapwort, whisk one tablespoon into one third cup water until it lathers nicely, being careful not to inhale the powder as you measure and mix.

Cover the bowl and set it aside for an hour or more. Then strain the liquid through a piece of cheesecloth held in a sieve: wring out the cheesecloth lightly, and your extract is ready to use. Put one cup of sugar and one-third cup water in a saucepan, and heat for a few minutes until the sugar has dissolved. Add one tablespoon each of lemon juice and orange-flower water or rose water  and boil the syrup. uncovered, until the temperature reaches 250°F or until a small amount dropped into a cup of cold water forms a thread. Resist the impulse to stir throughout this cooking time!

Remove the pan from the heat immediately when the right stage has been reached. Finally, in a bowl large enough to allow for a doubling of the volume, drizzle the hot sugar syrup slowly into the soapwort ex- tract, beating vigorously and continuously until the mixture is thick, shiny, and bright white. Stiff egg whites are sometimes added at this point, but they are neither necessary nor recommended, because of the risk of salmonella from uncooked eggs. The sweet, white, thick and creamy sauce thus produced is naatif, the exquisite accompaniment for karabij pastries.

In Turkey, it is also the raison d’etre of another popular sweetmeat, kagit helvasa, consisting of two paper-thin wafers, about ten inches across, glued together with this extraordinary sauce. To make tahini halvah, the sweetened soapwort syrup is folded into the crushed sesame seeds, both to lighten the mixture and to keep the sesame oil from separating; the halvah is then further flavored, and molded into large blocks.

Soapwort root has an astringent, tealike flavor and a pleasant light fragrance that is fresh and what else?-clean. For this reason, pieces of the wood are also used in Arabia to keep a broth fresh and sweet, much as bay leaves might be used in Europe or mint leaves in Mexico. Soapwort is frequently employed in this manner when making the famous Arabian fish and rice dish sayadiyyah, in which the rice cooks in the fish broth; the pieces of root are removed before serving.

Although soapwort has multiple therapeutic benefits, it is primarily taken internally as an expectorant or a remedy for coughs. It is believed that the herb’s function as a potent irritant in the alimentary canal or gut invigorates the cough reaction and induces the secretion of more liquid mucus inside the respiratory tract. As a result of this property of soapwort, the herbal medical practitioners recommend the use of the aromatic plant to cure bronchitis, coughs and even some conditions of asthma (a respiratory disease caused by allergies).

The herb has other therapeutic advantages too and is used to treat rheumatic and arthritic pain. Decoctions prepared with the roots of the herb are effective in treating skin conditions such as eczema and itchiness. Even infusions prepared with the soapwort parts above the ground helps in washing the skin and bringing relief from irritations.

Warning: Soapwort, like the other so-called “soap plants” such as soapweed (Yucca glauca), soapbark (Quillaja saponaria), and soap berries (Sapindus species), are relatively high in saponins, the substances that account for the long-lasting lather produced when parts of these plants are vigorously mixed with water. Saponins occur in varying amounts in many edible herbs and vegetables, but in large doses they can irritate the respiratory and digestive systems and can even function as a dangerously strong purgative. On ingestion, saponins can destroy red blood cells.

Be very sparing in your use of soapwort: only a small amount is required to make a dish. If you have the powdered root, avoid inhaling deeply over it, as it is particularly distressing to the mucous membranes.

The soapwort is indigenous to the temperate clime zones in Europe, Asia and North America. The plant grows and flourishes in the open forested regions as well as the sides of the railway tracks. Normally, the soapwort is extensively grown as a garden herb. While the flowers of soapwort are collected in summer, the roots of the herb are dug out in autumn. The root as well as the tuber or bulb of soapwort is of high therapeutic value and it is advisable that they be dug out between September and October and dehydrated in the sun for future use. The leaves of the herb are also of medicinal use and they are gathered between July and August.