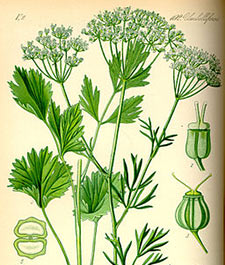 Anise bears a strong family resemblance to the members of the carrot family, which includes dill, fennel, coriander, cumin and caraway. Many of these relatives have been described as having a licorice flavour, to some extent, but anise is the true taste of licorice— its oils are distilled into the flavouring for licorice candy (not from the herb licorice, which has a different taste).

Anise is native to the eastern Mediterranean region, the Levant, and Egypt. The early Arabic name was anysum from which was derived the Greek anison and the Latin anisun. It is one of the oldest known spice plants used both for culinary and medicinal purposes since ancient times. There is evidence that anise was used in Egypt as early as 1500 B.C.

To aid digestion the Romans enjoyed anise-spiced cakes after heavy meals and it was spread throughout Europe by Roman legions. In the Bible, there is mention of paying tithe with anise in the book of Matthew. In 1305, anise was listed by King Edward I as a taxable drug and merchants bringing it into London paid a toll to help raise money to maintain and repair the London bridge.

Of the many of the qualities attributed to anise we like what one writer warned: “it stirreth up bodily lust”. This is accredited to the same spice that could ward off the Evil Eye or keep away nightmares if placed under one’s pillow.

Anise is used in the manufacture of many commercial cough syrups and sore throat medications, used to flavour other medicines and to scent soaps and perfumes. It is also claimed that anise is an effective bait for rats and mice and the distilled oil dabbed onto a fishing lure will improve a fisherman’s chances. Dogs are also attracted by anise — it is often an ingredient in dog food and the seeds may be used to lay drag-hunt trails and also by anti-blood sports movements to put hounds off the scent.

Though the roots and leaves are also edible, it is the seeds that we will concern ourselves with here. The seeds are grey-green to brownish, ribbed and ovate, measuring 2 -4 mm (.08 -.16 in) long. Some seeds retain the fine stalk that passes through the centre of the fruit.

The seeds quickly lose flavour, so buy seeds whole and grind as required, and keep out of light in an airtight container. If to be used as a breath sweetener, roast lightly before chewing the seeds.

Not to be confused with star anise, which is generally used in Chinese dishes, anise is primarily associated with cakes, biscuits and confectionery, as well as rye bread. It is used in much the same way as fennel to flavour fish, poultry, soups and root vegetable dishes. Numerous alcoholic drinks and cordials are flavoured with aniseed, particularly French pastis, Pernod and Ricard, Greek ouzo, Spanish ojen, Turkish raki, Italian anesone, Arab arrak and Egyptian kibib.

Called “Tut-te See-Hau” by American Indians, meaning “it expels the wind”, anise’s carminative properties have been known since antiquity. It helps with digestion and sweetens the breath, so it is chewed after meals in parts of Europe, the Middle East and India. It is a mild expectorant, anise often being used in cough mixtures and lozenges. It is also antiseptic, antispasmodic, soporific and a few seeds taken with water will often cure hiccups.

An erect, tender annual on thin roots, growing up to 60 cm (2 ft) tall. The lower leaves are broad, toothed and triangular with upper leaves that are smaller, divided and narrow. The flowers are small and whitish, numerous in open thin, compound umbrels, followed by the fruit, the anise seed. It is propagated by seed in early spring in a sunny, sheltered area in light, dry loam. It does not like pot growing or being transplanted. It will not produce ripe seeds in northern climates without a long, hot summer. Anise is harvested as the seeds change colour to grey-green. Flower stems are cut and hung upside down in a dry place and seeds are collected as they fall onto the paper below.